A classic shoot'em up game... not again. But hey, this one is different.

In the first second you start this game, you'll see the professional touch. The sound is somewhat epic, and the graphics are really good. I tested this one with the Samsung Galaxy Tab. It fully scales, no pixalted images, which means it's really stored in a big resolution. 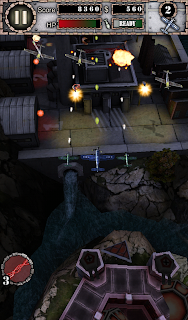 The plot is set in World War II. You can choose to fly a normal plane or a bomber. You guessed it. You have to fight against enemy planes and ground troops. You can bomb buildings and shoot the crap out of bosses on the end of levels. While you play, you collect extras and money. On certain checkpoints you can buy new weapons or ammo. Soon enough you have a powerful plane and shoot anything that moves.

For the technical side, like I mentioned before, the graphics are great. That comes with a price. Installed it has a hefty 26.5 MB. The Galaxy Tab with the 1GHZ and the good GPU runs this game without hiccups and fast. And I tell you, it's a blast on a 7" screen. But expect to have a Galaxy S or better with Android 2.2+ to have the same experience. It will run on low-end devices as long as you have enough RAM left, but you could face slowdowns.
The sound is almost orchestral. Fitting for the plot and like the graphic, well made. The difficulty is not very high at the beginning, which is good. It soon gets very busy on the screen, and there are explosions, gunfire, and enemy troops all over the display. Controls are good and very responsive on the Tab.. If you have soft-buttons you have to watch out not to press them. Sometimes you cover enemies with your finger, which can be annoying.

There is only a free lite version available by now. The full version will be available in March 2011 according to the in-game information. No mention on what it will cost, but if you like such games, it's worth it.

Update: After the latest update, it can't be downloaded on some devices. The full version is announced for March 11th 2011.

Pro
* Graphic is great
* So is the sound
* Scales on Tablets
* Looks well done
* Increasing difficulty. No shock.

Cons
* Even the lite version has a huge size