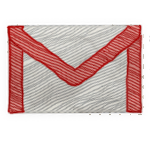 Google has released the newest version of GMail for Android 2.2+.

It mostly a bugfix update, and improves copying text in Gingerbread. Custom label colors will sync now, too. Check your market, or if you're the few unlucky ones that can't get it from there, you can try finding the .apk to install manually
Yes, there are still some lost souls on this planet that never got an update of GMail. Speculations are about the name which, in some countries, might not be used due to trademark infringements.

Update: I removed the link to droidforums. I tried their .apk and it causes a force close on the Galaxy Tab, which result in an endless loop if it starts syncing. So be careful it's risky :).