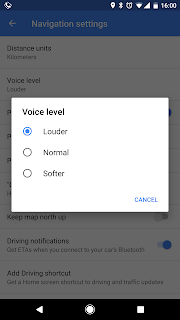 The last security update from February 2017 for the Gooogle Pixel fixed the distorted sound problem on high volume and more.

There were some users with that sound issue in different apps. One of these was especially annoying since it didn't help much to lower the volume. That was Google Maps. A great feature is to play the volume even louder on your phone, even when it set to medium level. That made sure you hear the turn-by-turn instructions while driving. The sound distortion on some Pixel devices were heavy and you had to turn this at least to normal. Now it's history.

With the latest update you can set it back on "louder" and having no distortion at all. On other apps the sound is now clear, too. Great!
But that's not all. The "BEEP" on the Google Assistant is back. Some users, including me, had the beep disappeared and there was only a slight vibration instead. This made the assistant almost useless for me, because the sense of it is imho to use it handsfree. So I need an accoustic confirmation and notice when to speak.
Glad that the security update sometimes fixes urgent bugs, too. That's exactly why I shove out so much money.
Posted by Ryo at 15:17