Me And The Samsung Galaxy Tab 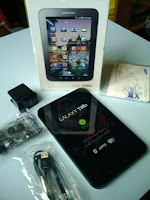 At last I got a tablet. Big deal. And now what? While I'm very excited about, I ask myself, why I wanted one so badly. In search of a use-case.

First let me tell you about this wonderful, and elegant piece of high-tech. It's coming with Android 2.2 Froyo, has a great display (SLCD), and lots of RAM. 2GB for Apps and 16 GB total. That's plenty of space. Of course you can add a lot of RAM with an microSDHC-card. The Samsung UI is not as irritating as most of the other UI's on the market. I still would very much prefer the original Vanilla-UI. However, the tweaks and modifications to work as a tablet are well made. Google might say, that Froyo is not meant for tablets, but if you use this fine piece, you instantly know, this is it. That's how a tablet should be. There is always room for improvements regarding the connectors, or the camera, which is only 3.2 MP. But you can record HD-Video. And the device is capable of playing Full-HD movies. If you ask yourself how, with a display that hasn't HD-resolution, you can connect it to your TV with a HDMI-cable and doing even more than watching movies. It's fast! Really fast. It's shiny and beautiful, and together with the newest version of voice search, it feels like magic. It's like you're in a Harry Potter movie. You say things and they happen. So, it's a great device. The best tablet on the market for sure. 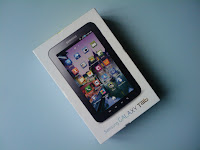 But where there is light, there is shadow. It's ridiculously expensive. I know, not everywhere in the world, but still expensive enough. There is a special connector. You need a special cable to connect to HDMI. This counts for the connection to the computer, too. The motion sensors are way to sensitive. A little bow with your hand while holding, and it rotates the screen. There are some pre-installed apps you can't uninstall. ThinkFree Office e.g. I'll never use this, but it hogs in my device. And the integrated DLNA-Client (!) doesn't recognize some standard DLNA-Servers, like Mediatomb. But these are only some minor caveats. It's not holding you from calling this device great!

Remember me writing that I'll never buy such an expensive device? Well, yeah I couldn't wait any longer. I wanted the Notion Ink Adam, but this is almost ready to be called Vaporware. Then there was another pad, which name I won't even writing anymore. Then the Archos 10.1, which Archos made it a drama to get one, and left early adopters in the dust. So there was this nice tablet running Froyo and it looked cute, and with a contract I paid only about $210. Sure, the contract made it 24 * $56 which brings me to the insanely price of $1554 (!). But I can use that contract for other purposes, too. So this isn't such a great loss. 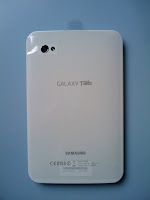 However, I have problems to find a use-case. Sure, I made the jump from 1.6 to 2.2 so everything is green and blue and the sun shines when I switch on the Galaxy Tab. But then I'm asking myself, if it isn't completely obsolete when I buy my new phone, which looks like it will be the Desire HD. It has a 4.3 inch screen, which is big enough, but small enough to take it with you like a cell cellphone. You can't seriously use the Tab as a phone, although it has all the capabilities and you could do.
So what am I'm going to do with it? Sure I will do stuff with it and it will be nothing that I couldn't do with a newer Android-phone. It's like the same I moaned about with the iPad. The iPad is just a bigger iPod touch. And the Samsung Galaxy Tab, is just a bigger Samsung Galaxy S phone. I don't need it. But I'll love it.
Posted by Ryo at 19:18