Again and Again: Android is Not For Ripping Off Users Money 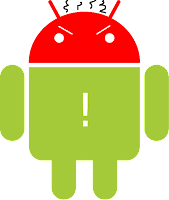 The news stroke again this week, when a spectacular article said than on Android OS less people buying stuff, but downloading more free apps. So what?

Again, I always read about the developers. Well how many percent of the actual Android users are developers? Users are important, not the moneybags of some developers. Sorry to say that, and I won't make everyone happy with this, but from a users point of view, Android is so much better not alone because it is no El Dorado for the developers. Some of them would deny that. Some of them can make good money on Android. But as a user, I don't have to care about the money of the developers. I care about my money. And the more free apps I can get the better for me.
Android users in general do buy stuff. I buy stuff, too. But only if I think it's worth it. I'm no zombie-buyer or sheep, who clicks on "Buy" at any ridiculous app. If developers want my money, they need to do an outstanding app. Something that feels worth spending the money. If they simply want to rip off people, Android is the wrong platform for them.

Again I miss the voice of the users in the press. They all talk about developers. I'm not. I fight for the users. :)