Google acquired Clever Sense recently, only after a few days earlier, it was confirmed that internally Google already worked on a competitor to Siri.

With all the news headline and hype about Siri, it was inevitable somehow, even with Voice Actions already running for over 1 year on Android devices, much earlier than the Apple bought Siri and came with their version of Voice Actions.

Andy Rubin said at the first official ICS presentation, that it's not the way to operate a phone. And I think he is right. I said before about Voice Actions, and after seeing Siri, that this is definitely not the way.
Can you imagine sitting in a doctor's waiting room and shouting commands? Or in public transport? Have luck to use it on the street with all the voices and car noises. Not to mention any place where many people are. like meetings, bar, malls...
What's about privacy concerns? Do you really want to dictate your personal email, while someone is sitting next to you?
The only place you really can get use out of it is in your car (if you're driving alone), or in your house. And there you probably have a computer waiting. I can understand the fascination. I had that with Google Voice Actions when it came out. But after a few days I realized, I was so much faster by just clicking the icons on the screen, than actually invoke the voice recognition, speak what I want, and waiting for the recognition. 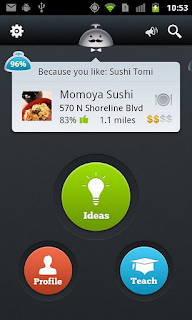 Now having said that, it's not such a big deal that Google, once again, released this app for US only at the moment, without any obvious reason. Maybe they think the jerks outside the US can't even talk English. Maybe they are right. If you want to even call American language "English". So, if you speak English something and live within the boundaries of the USA, you could download the app right now from the market and having fun to make using your phone even more ineffective :)