Some problems came to the surface after a recent update with the Google Assistant and Google Home. 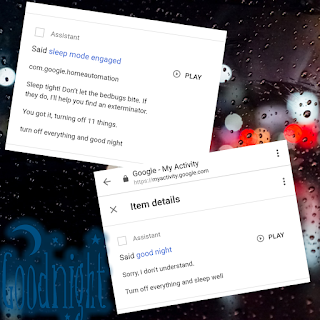 Now shortcuts that have a name like predefined shortcuts are not executed properly. Under some circumstances the whole command, even if correct, doesn't work.

For example my heavily used shortcut "Good Night" just stopped working. It executes "Turn off everything and sleep well".
I had to change the shortcut main(!) trigger phrase to "sleep mode engaged" with is not assigned (who would say such a thing :D).
Now it works again. For trying I changed the command to "turn off everything and good night" to see if that works. Yupp, it's doing fine.
So you can use a command which is a shortcut phrase in another shortcut. But it will not execute it like an array of commands, but it just uses the words as such, in this case "good night" no matter what a same called shortcut would do.

Totally confused now? You're not alone. That's why Google is readying "Routines" where you can set a bigger array of commands into one "phrase". That is very welcomed. Then you can use shortcuts as they are meant. Just to put a longer command into a short one, like "play Inaxycvgtgb on google play music" if you just say "Fun".
Posted by Ryo at 09:26